From History of Watford - Trade Directory, 1884 by Henry Williams


The river Colne rises in two streams, one at Colney Heath, near Hatfield, and the other between Elstree and Barnet; it flows south­west in a winding course through Herts to Rickmansworth, and leaves a few miles south of that place. The area of its basin in Herts is 200 square miles. Looking at that part of the valley of the Colne in the parish of Watford, one is led to the conclusion that in the olden times this valley was one marsh or swamp, and that the artificial banks, which now hold the stream and direct its course through the centre of the valley, were made to concentrate the water for the use of the neighbouring mills.

Some time ago, when excavating at the 'Watford Gas Works, the workmen found a number of bones, which were submitted to Dr. Brett for examination, who pronounced some to be human, and others those of a horse and red deer; they were afterwards seen by a professor of anatomy, who fully confirmed Dr. Brett's opinion thereon. The theory this circumstance introduces is, that the ford once at the bottom of the town was much wider than the present stream, and that some unfortunate man on horseback attempted to cross it and both were lost in the swamp; and that the other bones were those of one of the wild deer with which the woods of this county abounded centuries ago.

Fifty years ago the Colne at Watford abounded with fish, including fine trout, pike, and perch, and for many years no restriction existed as to fishing, and this sport was indulged in so extensively that the river was nearly bereft of its finny occupants.

Some years ago, however, Mr. Jonathan King and others concerned stopped the angling to a great extent, and the quantity of fish increased. At various times Mr. King put a quantity of Neuchâtel trout in the stream, and some fine ones have been occasionally caught - one in April, 1883, by Mr. C. H. Thomas, of Colnebrook, weighing nine pounds and three-quarters. In 1856, when there were plenty of fish in the Colne, Mr. King netted, at Wiggen Hall, fifty-four pounds of trout in one day. At one time the canal in Cassiobury Park was dragged periodically with a net, and a large quantity of fine fish caught, the best of which were sent as presents to some of the inhabitants of Watford. Mr. Mead has stated that the largest quantity of eels caught on any one day at Watford Mills was about three hundredweight. Fish hatching was carried on at one time by Mr. Hibbert, Lord Essex, and Mr. J King.

About thirty-five years ago there was a public-house at the bottom of Water Lane, close to the river, which when closed was turned into the two cottages now there. The sign was the "Fighting Cocks," a very apropos sign, as the brutal pastime of cock-fighting was carried on there at one time. During the time of the last occupant, Mrs. Lucy Deacon, it was a pleasure-boat station, where one could hire a boat and enjoy a row up the river as far as Bushey Mill Bridge; the charge was one shilling per hour, and the person or party hiring the boat was required to leave half-a-crown with the landlady as a security against any loss she might sustain by damage done to her boat. The house and premises were generally crowded on Sunday afternoons and evenings, and not infrequently a spill into the water occurred when the boat was occupied by youth who had indulged freely in drinking before they had started on their voyage up the Colne. The bridge over the river, and also that over the ditch beyond, were widened by the late Mr. Majoribanks; he also desired to widen the bridge over the Rickmansworth Railway in Water Lane, but the company's terms were not acceptable to him, and consequently an improvement so desirable was not carried out. 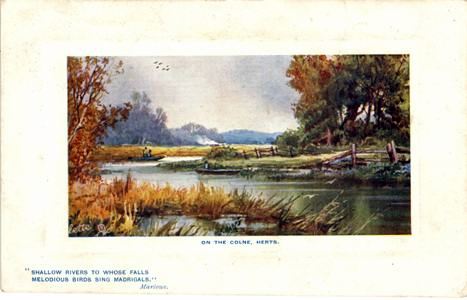 In January 1926 Mr Andrew-Artha was given permission to provide and hire out boats on the new Corporation’s water at Wiggenhall. This was initially for 3 years and he would pay £30 a year if Sunday boating was allowed, otherwise £20 a year. The number of boats was limited to 12 and the type and construction had to be approved. Permission was also given to erect a boathouse. Boats were hired out at 3d and 6d a session and by 1929 the boating licence was being shared with a Mr Lock. Mr Andrew-Artha also had to insure against accidents and exercise proper supervision. But in June 1926 the Corporation Engineer was instructed to put up notices warning boaters about straying onto stretches of the river owned by the Gas Company and again in May 1927 there were further complaints of persons using boats beyond the Corporation’s bounds.

Also during this time, there was an on-going battle between those who wanted strict Sunday observance and those who did not. The Estates Committee did recommend that boating be allowed seven days a week, but at a later meeting two aldermen proposed boating only be allowed on weekdays and the amendment was carried. In May 1927 Mr Greenfield asked again for Sunday boating, but the matter was deferred ‘until the current licence expires’.  A year later the Estates Committee turned down another request, this time to sell minerals and confectionery on Sundays and a few weeks later the lessees of the boathouse had to write a letter of apology to the Town Clerk for doing just that -  selling minerals on a Sunday.

But it has been recalled by residents remembering the 1930s that sweets, soft drinks and ice cream were sold from the boat house and as there was no electricity or gas, refrigeration was via a bucket of ice from an ice factory in Wiggenhall Road. When the Second World War came along, the boating and refreshment business carried on for a little while, minus the ice cream and a shadow of his former self, Mr Andrew-Artha died in 1943. The boathouse was closed and demolished. 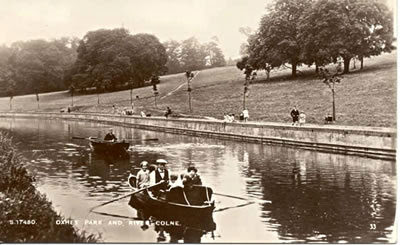 Watford Borough Council and The Colne Catchment Action Network has launched a new 10 year project that aims to bring eight different sections of the River Colne into the public realm.

It will mean residents can access the river and enjoy riverbank walks and a range of water based activities, pastimes and educational programmes.


The river, which is a tributary of the Thames, will undergo an extensive cleanup and a key goal is to attract back the original biodiversity of the river and its banks including plants, fish, birds and insects and other species. Key to the project will be harnessing a strong ‘citizen science’ volunteer force who can carry a range of support activities including water monitoring.
Environmental charity Groundwork has been appointed by the council to lead on the first phase of the project which is called Rediscovering the River Colne. In the initial development phase it will create a habitat and access improvement strategy for the following public sites:
The improvements identified for each site will be delivered by a specialist contractor,* local partners and stakeholders and volunteers. **A number of privately owned sites along the river will also be targeted.
A launch event was held for the project this week (Monday 9 September 2019). Guests assembled at Knutsford Playing Fields, where they heard detail of the many elements of the project from partners. Sandy Belloni of Community Connection Projects CIC, then ran a selection of conservation and water quality activities including river fly monitoring and guests were invited to walk along the river via Radlett Road Playing Fields and Waterfields Recreation Ground.
Sam Harbour, Project Officer for Groundwork said “This is an exciting project that is currently in its infancy, with the scope to become something really great. We’re looking forward to improving the health and biodiversity of the river Colne, as well as restoring and instilling it as a community resource.”

Email ThisBlogThis!Share to TwitterShare to FacebookShare to Pinterest
Labels: boating at Oxhey Park, cleaning up the River Colne, fishing in the Colne at Watford, River Colne