A Brief History of West Watford 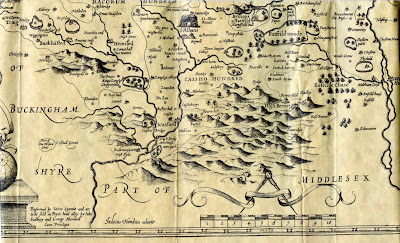 Much has been researched and written about the town of Watford and Cassiobury, but our research to date (2019) has concentrated particularly on West Watford. We now feel it time to spread our wings, so to speak, and widen our area of research to the surrounding areas, as they have much to offer and are often linked to West Watford in some way, however small.  Or perhaps they are simply interesting.

If we go back in time some considerable way and consult the maps and references that are available, we can see that most of our area of interest was field, farm, meadow and marsh. At Hamper Mill, to the south of Brightwells Farm, Roman artefacts were excavated, including part of a trackway.  Further west, Iron Age artefacts were discovered during the construction of Greenhill Crescent.


There were two tracks/roads leading from Hamper Mill and Rickmansworth to Watford, early bridges over the Colne at Hamper Mill and in Moor Lane and at least six  farms on the way to Watford; Hampton Hall Farm, Moor Lane, (this includes the site of Hampton Hall which may also be the site of the medieval manor of Batchworth. It is named for a 14th lord of the manor, William Hampton. The manor house is mentioned in 1520 and may have been extant until 1839. The farm stands in what was its garden area and was built in the 1840s), Tolpits Farm, Brightwells Farm (at one time Hatters Farm), Holywell Farm, Cole Kings and Harwoods Farm. What is left of Tolpits Farm is now Tolpits House on a bend of the road where Moor Lane merges with Tolpits Lane and is part of Merchant Taylors School. Holywell, Cole Kings and Harwoods are gone and only Brightwells remains, which may possibly be as old as, or perhaps older, than the Manor of Cashio.


There was very little in the way of expansion in the 'town' of Watford from the 12th to the 18th century. The 'one long street' then began to acquire yards and alleyways. In Briton's The Beauties of England & Wales, written in 1807, he describes Watford as a large, populous and busy town, the chief employment of its labouring classes being mainly agriculture, although there being three silk mills. The population of Watford is given as 3,530 and the number of houses 691. By 1850 there are two paper mills besides the silk mills, two breweries and several malt kilns. In 1851 the population is 8,646, yet twenty years later it has increased to 12,071.


If you look at successive maps of Watford, you can see the rapid expansion of the town, especially after the coming of the railway in 1837. In 1849, Watford is still more or less 'the High Street', although Watford Place, Colney Butts and the Union House (Workhouse) are marked.  By 1871 there has been much growth down towards the railway (Watford Junction) and to Cassio and Nascot Wood, but Watford Cemetery is now in evidence, Colney Butts in Vicarage Road has changed to the Red Lion and further south, down by the River Colne, Holywell is shown to now be a country estate. Yet either side of what is Vicarage Road, there remains much farmland and though Merton Road is in existence, abutting the High Street are still meadows, paddocks, orchards and close to where Market Street was later to be found, a riding school. On the 1899 Ordnance Survey Map, new streets are now shown in the area between Watford Place; Vicarage Road, St Mary's Road and Market Street continuing towards Rickmansworth Road. The Watford Cottage Hospital (Victoria House) in Vicarage Road, came into being in 1885.

In July 1860 Lord Ebury obtained powers to construct a 4.5 mile single track line between Watford and Rickmansworth which opened in October 1862. Anxious of the growing influence of the Metropolitan Railway in north-west London, the LNWR added a short branch line to Croxley Green. Works commenced in 1908 and the new route opened in June 1912.

As the demand for land and houses continued, parcels of land came up for sale. Beginning in 1897, Messrs. Ashby and Brightman made a series of purchases from the Earl of Essex, which resulted in Watford making even more rapid strides than previously. In 1900, 50 acres of Harwoods Farm Estate was purchased for £26,500 (£350 per acre), starting from Cassio Road and adjoining the West Herts Cricket Ground, one acre of this land already having been sold by the Earl of Essex to the Watford School Board for £1,500 for the purpose of Victoria Schools. In November 1901, Messrs Ashby and Brightman purchased a second portion of the estate of about 52 acres, which extended from Harwoods Road to Hagden Lane and Rickmansworth Road. In 1902, Cassiobridge Farm Estate was in the market, approximately 208 acres, extending from Rickmansworth Main Road to the lower end of the boundaries of Lord Ebury's Estate and the Isolation Hospital.  Such was the demand for building at this time that £12,000 worth in plots was sold in the first sale. Harwoods Road, Park Avenue, Chester Road, Durban Road and Mildred Avenue were formed and sewered at this time and also in 1900, the Watford School Board acquired the site for Chater Schools, with a further three quarters of an acre being purchased for an extension to the Victoria Schools. The rapid growth and progress also made it necessary for Hagden Lane to be widened and, as a result of the development of the Harwoods Estate, a new ecclesiastical parish was formed in 1905 (St Michael's) and sites were sold for churches and chapels of various denominations. On three separate occasions, the extension of the Urban District followed the purchases made by Messrs Ashby and Brightman. It was Messrs Ashby and Brightman who also sold 120 acres to Watford Urban District Council for use as a sewage farm.

By 1920 the cemetery had been engulfed by housing. The Estate of Holywell (most famous for Mr Snewing's horse Caractacus who won the Derby in 1862 – see other Blog) was sold at Auction in 1887 and became a municipal farm. The Isolation Hospital in Tolpits Lane was erected in 1896 (closing in 1982), the land from the River Colne, across what is now Holywell Estate and Croxley View as far as Cassiobridge became sewage farms.

The introduction of the railways contributed to the expansion of the population and after the First World War, industry - particularly printing - found Watford a suitable site for the introduction of modern machinery. In 1932, Sun Engraving acquired the Storey Brothers’ interest in Rembrandt Intaglio Printing Co., moved the operations from London to Watford (Whippendell Road) in 1934 and over the next few years developed a huge and ever-expanding rotary photogravure facility to produce magazines and catalogues. Scammell Lorries opened a factory in Tolpits Lane in 1922 and eventually the Workhouse in Vicarage Road evolved into Shrodells and then Watford General Hospital.

In 1951, the Borough produced the "Development Plan" for the Town, its proposals covering everything from sewage disposal to recreational spaces to the need for a new location for the Drill Hall, to shops, but most especially the need for new Council Housing.  'The Holywell' as a housing estate had come into being as a result of this Plan with Croxley View emerging in the mid-1960s.  Holywell Farm, off Vicarage Road - or what was left of it - had already been demolished, to be replaced for a short time by a slaughterhouse, Cole Kings, in Hagden Lane - a listed building - unfortunately suffered the same fate. Even the Highwayman pub in Tolpits Lane has now gone (named, incidentally after the first truck off the Scammell production line across the road and not after Dick Turpin or one of his compatriots). Only Brightwells remains and, of course, Hamper Mill.

Throughout the years, there has been a constant influx of people of various nationalities, all putting their mark on West Watford. Places change. Businesses, industries, shops, houses, people, come and go. The changes make up the history and through our continued collective research, it is our aim to document the developing history of West Watford and publish our findings through this group.