The Colne Valley Water Company opened the Eastbury Pumping Station near Watford in 1873. In 1931/1932, the company opened a narrow gauge railway connecting the pumping station with the LNWR's standard gauge branch line that ran between Watford and Rickmansworth.  The 2.0' narrow gauge line ran southeast from a private siding on the LNWR (the remains of which can still be seen) across the fields of Brightwell Farm, crossing the River Colne via a relatively substantial plate girder bridge. The line ended in a yard at the pumping station.

Coal and salt were delivered by the LMS via its Watford to Rickmansworth branch line as far as the Brightwells Farm transfer sidings and transferred to the Water Company's own 2.0' gauge wagons, then hauled the short distance by one of two Ruston Hornsby twin cylinder 16hp diesel locomotives. The coal was to power the pumping station and salt and chlorine were used for the water softening plant.

When the pumping station switched from coal to diesel power in 1956, the use of the railway declined significantly, though chlorine and salt were still carried by rail.
The line closed in 1967 and the two locomotives (RH166015, 4wDM, 1932 and RH1662024, 4wDM, 1933)  were purchased for preservation by the Amberley Chalk Pits Museum near Arundel in West Sussex.

Very little is left to show where the railway ran across the fields. The place where the transfer sidings was can still be viewed from what is now the Ebury Way (previously the LNWR Watford to Rickmansworth branch line).  On the public footpath that runs from Brightwell Farm to Hamper Mill, remains of the footings for the footbridge can still be seen, with original gates now part of the field fence. The track bed can be seen rising slightly towards the river to the southeast (Eastbury Road side), but the girder bridge is impassable and on private land.

The green painted triangular structure in the centre of the photo below, is/was a footbridge. Walkers using the public footpath to and from Hamper Mill used it to cross the railway. It came from the ‘Never Stop Railway’ at the Wembley Exhibition, 1925. 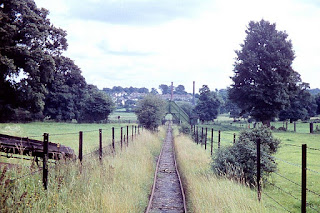 Photograph of the triangular bridge is reproduced by kind permission of
Ron Fisher.          http://www.flickr.com/photos/train-pix/

See further photos in the Gallery

Some history of water extraction in the Colne Valley area


In 1837, Robert Stephenson, while acting as the engineer on the London to Birmingham railway line, sank boreholes for water supply. In 1840, a committee of the House of Lords instructed him to carry out further investigations in the Bushey area, where there was no piped water. He established that a good supply could be provided in the Colne Valley area but it took another 30 years and a typhoid outbreak before anything was done. Eventually, an agreement was reached in December 1872 to form a water company, based on Stephenson's findings and a parliamentary bill was approved in June 1873. The estimated population to be served was a mere 7,000.

There was an initial reluctance by the public to subscribe due to the long-term nature of the investment but shares were eventually issued at par. Within five years of opening, Colne Valley Water was supplying 250,000 gallons a day to a population of under 9,000 although no dividends were paid until 1883. In 1885, Colne Valley made its first acquisition of a neighbouring undertaking – Harrow Waterworks. The Central Middlesex Water Co. was bought in 1894, taking the company into Wembley. By 1900, Colne Valley was supplying a population of 60,000 and the ensuing decades featured applications for new boreholes to service the steadily increasing population.

In 1927, a new bill was presented to Parliament for two additional pumping stations near St Albans. The bill was opposed by the Metropolitan Water Board and withdrawn by Colne Valley with the MWB agreeing to supply Colne with 5 million gallons a day. However, in return, Colne agreed that it would not seek approval for new wells within the watershed of the River Thames and its tributaries – in effect, forfeiting the right to develop water resources in its own area of supply. The restriction was described as "crippling" and it was 26 years before the agreement was terminated. Some incremental supply was obtained in 1935 when the Bushey Hall Gravel Company sank wells on its reserves, and in 1938 from the Grand Union Canal's Aldenham reservoir.

In 1941, Colne Valley decided that it need a reservoir for additional storage and a bill was introduced for the construction of the Hilfield Park Reservoir. As earlier, the bill was withdrawn in the face of opposition but was successfully reintroduced in 1945. Under the Colne Valley Water Act 1945, the Company began construction of the reservoir in 1951 and it was completed it in 1955. At the time, it was the only known reservoir to be built for storing water pumped from underground. In 1956, the government advocated the regrouping of water companies into larger units and the acquisition of two water companies followed - St Albans in 1959 and Harpenden in 1960. Later came the acquisition of two local authority water undertakings - St Albans RDC in 1962 and the much larger Watford Corporation in 1973.

It was recognised that the underground water resources could not be developed further and there would be a need to source water from the Thames. Colne promoted the Three Valleys Scheme in conjunction with the Rickmansworth & Uxbridge Valley and Lee Valley water companies. Thames Conservancy issued a licence for the extraction of 18 million gallons a day in 1973, to rise to 50 million gallons a day in 1985. Work began in 1972 on the construction of nine miles of trunk main from the Thames to Harrow on the Hill, completed in 1974.

In 1994, the three companies that had worked on the Scheme twenty years previous, the Colne Valley, the Rickmansworth and Lee Valley Water companies merged to form Three Valleys Water plc. That in turn was acquired by Veolia Water UK in 1987.
Reference: WikiMili Colne Valley Water