The Watford Glass Co Ltd appears to have been in manufacturing from the late 1920's to the early 1990's. Founded by Gus Kiwi, from Germany and continued by Felicity Peck, Gus's daughter, followed by her children until the works closed. The company produced cut clear and coloured tableware and other glassware for sale through several department stores, including Cawdells in Watford, now long gone. Two vases were made as a special order for Buckingham Palace.

The 1953 Pottery Gazette & Glass Trades Review Reference Book lists this firm as being in 13A Liverpool Road, Watford, under Glassware Decorators, but not Glass Manufacturers. In the article below, Mr Woodland states that after demob he went to Watford Glass, which at that time was in Greenhill Crescent.

The following is an article from the Barnet & Potters Bar Times printed in 2005. 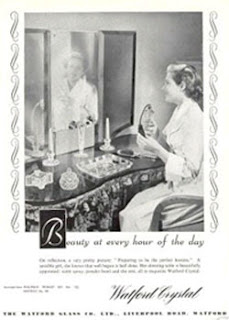 A picture of the Watford Glass Company and recollections from a former employee published in the printed edition of the Watford Observer on October 7, prompted Colin D Woodland to write in:
"I worked at the Watford Glass Company on leaving school in April 1956, as an apprentice glass cutter. I started unpacking the glass from wooden crates to take to the cutting shop. I often had to help out in the acid room, where the fumes took your breath away I did not like that job and I would have to take the black lines off the finished cut glass, which was called blacking off'. "After about four months I was taken under the care of Charlie Beason, my foreman for the next two-and-a-half years. He taught me everything.
"The firm bought a new diamond wheel cutting machine, which Charlie trained me on, and I was put on piece work, where you got paid for what you cut and not an hourly wage, but I enjoyed every day at Watford Glass.
"After two-and-a-half years I went into the Army, where I stayed for six years. On my demob I went to Watford Glass, which was on the Greenhill Crescent site and, on entering the building, in the reception I noticed a very large photo, four feet by four feet, of myself on the reception wall, which the firm had taken of me cutting on the diamond machine. I spoke to Charlie, who was still the foreman at that time, but was not offered a job." 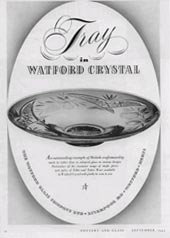 Colin adds that the firm was called Watford Glass Company and the finished product was sold as Watford Crystal. He also lists the names of all the employees he can recall: Bill Voight, manager; Charlie Beason, foreman; Nigel Williams, smoother; Don Hansard, smoother; Albert Hatton, smoother; Jean Hatton, fluter; Brian Twigg, blacking off; Arthur Gray, smoother; Terry Parrott, cutter; Jean Parrott, fluter; John Hall, cutter; Ken Green, smoother; Ray Knight, cutter; Dave Edwards, smoother; Jim Smith, acid-dipper.
Colin explained that a cutter would cut the pattern into the glass, then the smoother would finish off any rough edges and the glassware was then dipped in acid, before being dried off in sawdust. Every completed item bore a blue sticker in the shape of a shield with "Watford Crystal, England" in gold lettering. Watford Crystal was sold by Cawdells, John Lewis and James Walker.
Colin's proudest memory is of being assigned the task of cutting two ten-inch vases, one red, one blue, which had been ordered for Buckingham Palace. "I was ever so proud. I was very careful and Charlie said 'well done' when I'd finished."

Watford Crystal did not actually make the crystal - they only hand cut and acid polished it. Most of the 'blanks' as they were called were imported from Belgium, Czechoslovakia and Germany. As time went on suppliers were found in UK i.e. Nazeing Glassworks in Broxbourne and Whitefriars Glass in Harrow. 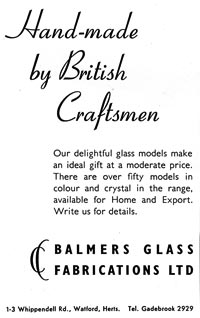 Their address was given as 1 Whippendell Road. The above advertisement is taken from that reference book. 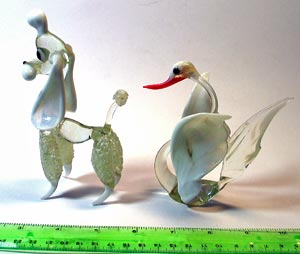 These nicely detailed glass animals were bought locally. Were they made
by Balmers?

These glass animals were very popular in the 1950's and it's believed that one outlet was Watford Market.  If anyone can corroborate that, we would be grateful.
Also, if anyone has any recollections of glass manufacturing in Watford, we would love to hear from you.