A History of Holywell Farm, Watford

The name Holywell is common throughout England and Wales and the derivation comes from Anglo Saxon, but not all such place names had a well.

Holywell Farm in West Watford lay at the end of Vicarage Road, about a mile from the town, with land abutting the River Colne and a view across to Oxhey. To put it into today's map, it was where Stripling Way leads onto the Lairage Land and covering the land where Laurance Haines school is now and what became Harwoods recreation ground. It was being farmed before the coming of the Watford to Croxley branch line, which was begun in 1908. In fact, according to early censuses, the address is variously given as Holywell Farm, Moor Lane, Oxhey Hamlet, in the District of Watford.  When it was sold at auction in 1887 it was advertised as being on the High Road from Watford. Further on down Vicarage Road is Brightwells Farm, still in existence. 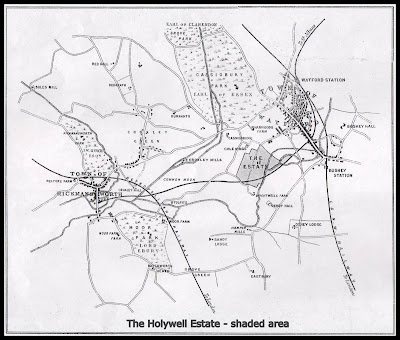 In the 1700s into the late 1800s, Watford was very much an agricultural landscape and Agricultural Labourer is often given as an occupation on the early censuses, along with shepherd boy, cowman and cowboy.

One of the earliest references to Holywell Farm is with regard to a Mr Jonathan Cox Lovett, born July 1739. His father was Daniel, his mother Elizabeth and he was baptised at St Mary’s Watford. He died a widower in March 1787 and there is an interesting reference to him in Henry Williams's History of Watford and Trade Directory published in 1884 regarding charitable endowments in relation to Dame Fuller's Free School, 'without which the income it possessed in the time of the foundress would have proved wholly inadequate to carry her pious intentions into effect had it not been for the benevolent consideration of subsequent benefactors who bequeathed certain sums to supply the deficiencies'.


Robert Clutterbuck (1772 – 1831) who spent 18 years writing The History and Antiquities of the County of Hertford,  wrote of a circumstance in connection with the said school. He says: "Mr Jonathan Cox Lovett, of Holywell, in this parish, by his will dated the 1st of May, 1780, made a reversionary devise of certain estates consisting of Holywell Farm, etc., to the trustees of this school; this devise, however, from having been made within twelve months of his decease and from not having been enrolled in Chancery, became void by the Act of the 9th of George II. c.36, called the Statute of Mortmain. Had this devise taken effect, the rents of the estates so devised would have been fully adequate to the future support of the school; under existing circumstances, however, its income must, in process of time, from the causes I have mentioned, be insufficient to defray its expenses."

Another early reference to the farm is the 1841 census on which John Tookey (b1781)) is named as Farmer and his birthplace is given as Hertfordshire. He was living at Holywell Farm along with his wife Mary, of the same age and nine others including William Saunders aged 25 (b1816), agricultural labourer, his wife and three children and Thomas Sawyer aged 15, also recorded as agricultural labourer. The others Ellen, Mary, John and Thomas are given as family members.
Ten years later on the 1851 census, there is no mention of 'a farmer'  or Head of household (they could have been away at the time), but William Saunders is still in residence as agricultural labourer, along with Ann, recorded as wife/charwoman, son George 15, farm labourer, Mary, just recorded as 'at home', Edward, now 11 shepherd boy, Emma, Eliza and Susannah, daughters. All from Watford, except Ann.
In 1861, Holywell Farm has clearly changed ownership and the census for that year records: Charles Snewing, b. 1817 in Warwickshire, married, farmer of 108 acres employing 8 men and 2 boys. This is the Charles Snewing of Caractacus racehorse fame (see detailed story in drop-down menu).
By 1871 Charles Snewing is still the owner of Holywell Farm and it is notable that William Saunders and his wife Ann are back in residence at the time of the census.
There are many references to Charles Snewing in the Watford Observer and other publications throughout his time at Holywell, usually with regard to horses and horse sales as, under his ownership, Holywell had become a stud farm. The following is just one example;

There are also references to William Saunders in the local paper who, in a later report is referred to as Mr Snewing's foreman.

Another small example of the farmer's life is shown in  the following short extract from the Herts Advertiser, Saturday 23rd December 1876 - 'Watford Christmas Meat Show' (an annual event by all accounts) when farmers and butchers from around the district would gather to show off their livestock and wares:

"The unseasonableness of the weather on Tuesday last made the butchers wonderfully chary about their display of Christmas fare and the consequence was that there was not nearly so fine a show as last year. Nothing is to be said against the quality of the meat, nearly all of which was of the very primest description  and reflected highly to the credit and ability of the  breeders. The fattening of stock and making it ripe for the butchers has become a very important branch of modern agriculture'. The article goes on to name all the farmers from all the farms around Watford, from as far afield as Winslow and Rickmansworth, together with their exhibits, which included pheasants and other game, hares, geese, turkeys, ducks, fowls, and of course, cattle and sheep. Charles Snewing of Holywell Farm is noted as "exhibiting a fat calf, fed by the exhibitor and 4 very prime southdown sheep, also fed by him".

Yet a rather more lengthy report from the Watford Observer of October 1872 (here abridged) concerns Henry Robinson and an alleged theft of tools from Frederick Hickford. He was accused of stealing a saw and shovels from Mr Snewing's Holywell Farm. A number of people were called to give statements regarding the tools. William Saunders stated: "I am foreman to Mr Charles Snewing of Holywell Farm, Watford. The hay fork has been lost since the other tools, but I cannot say when. We lost two shovels, a four-tined fork, and a spade last February, belonging to Mr. Snewing. They were taken out of the toolhouse on a Sunday evening. There have been marks on the tools produced where I usually mark Mr. Snewing’s, but they have been removed. The hay fork produced has also been marked in two places, as I usually mark them. Mr. Snewing bought the shovels himself. One of them was light and the other heavy. The heavy one had a tread on it, but the light one had not. The tools have all the appearance of those which belonged to Mr. Snewing".

Mr Boydell stated: I know the saw also by being able to bend it double; I never knew another saw that you could bend double. I also know it by the maker's name stamped on the plate. I do not think there are many saws in Watford by the same maker. I positively swear that the saw produced is mine.  I sold the shovels to Mr. Snewing myself."

Henry Purcell stated: I live at Lodge, Watford. I bought the four-tined fork off the prisoner on the 10th July last. I had previously sold the prisoner a load of dung, and had the fork in lien of money. The fork produced is the one that I bought off the prisoner. My wife gave it up to the police. I am a signalman on the London and North-Western Railway, and was on duty at Pinner Station at the time.

Police Constable Jennings stated: On Tuesday last, the 1st October, I received the fork produced from the last witness's wife at Wiggenhall Lodge. I found the light shovel in a hut on the Rickmansworth line, where the prisoner had been at work. The prisoner told the ganger to give it to me; he said that it belonged to him. I also found the spade produced on the line, hidden under some sleepers.

Saunders was again recalled. He said the spade produced was like one lost from Mr. Snewing’s. The brands had been cut out of it.

The prisoner pleaded not guilty to all the charges. He was committed for trial.