When the Moor Park Estate was sold off at Auction in 1919, the land that comprised the Estate was quite vast and stretched around Rickmansworth into parts of Middlesex and up towards Watford and included farms, fields, woods, cottages, streams, gravel beds and associated properties etc.

For the purposes of the Auction, the Estate was split into lots, each coloured and numbered and with an accompanying description of what was for sale and in a number of cases, a photograph of the property.

The map shows the area that was, at the time, the Cassiobridge Sewage Farm and what was to become Holywell Estate and Croxley View. Each of the coloured plots was numbered and given a description; for example, the small red plot numbered 81 refers to Cole Kings House, which stood where Holm Oak Park is now on the bend in Hagden Lane –

“an old-fashioned Residence with modern appointments standing in its own Grounds and occupying a very convenient position within five minutes’ walk of Watford West Station and about one and a half miles from Watford Junction. “ The Sale goes on to describe the building itself including the farm buildings and the Pleasure Grounds which –

“are well timbered and shrubbed and on the Eastern Lawn is a large Wellingtonia and an Araucaria.  They also include a Tennis Lawn, Rock Garden and Vegetable Garden, span-roofed Greenhouse and Vinery”.

The Watford Terrier (newspaper) of 1798 showed that John Dyson II, from the well-known Watford brewing family, already owned Brightwells Farm (also known as Hatters Farm) and occupied a further 115 acres (which could have been Cole Kings Farm south of Hagden Lane). In 1830 he owned 75 acres of Cole Kings Farm, but in 1844, just before his death, the Tithe Appointment shows that he owned 244 acres, which is presumed to be both Brightwells and Cole Kings Farms. 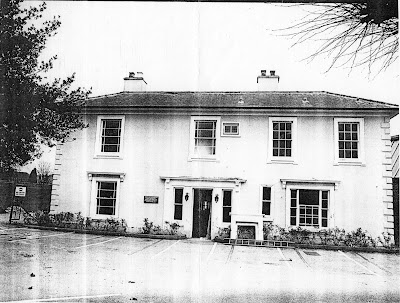 The building became the site of Austin Cartons, printing and cardboard box manufacturers, but closed in 1987. Plans were subsequently submitted by Oliver and Saunders Developments of New Barnet for 88 one and two-bedroomed flats and studio flats on the site. Residents in the local area had objected to the proposed development and had asked the Council to place a preservation order on the farmhouse.

However, the Developers said they had waited ten weeks for permission from the Council to demolish, but the Council was six months behind with their planning applications and so, as the building was considered of no architectural significance and not listed, the Company decided they were within their rights to bulldoze.

Councillor Veronica Conlon who chaired Watford Borough Council's Development Sub-Committee at the time described the action as an act of gross vandalism. "There is so little of Watford's Past left and now another part of the town's history has gone. It could have been revitalised and used for a whole variety of things. The developers seem to have jumped the gun, but there is little we can do."

Further photos of Cole Kings can be found in the Gallery