Earlier this month (August 2022) there was an unfortunate accident in the courtyard where the engraved memorial bricks are. A car hit a wall and quite some damage was done to the external door, interior office and surrounding structures.

Members of the Council's Conservation Team have been on site to assess the damage and save what bricks they can. There are some whole bricks which can hopefully be reused and more part/broken bricks so there is a bit of a jigsaw puzzle exercise to be done.

All bricks have been removed to a safe place and the area cordoned off and made secure.

Further updates will be issued when we know more. 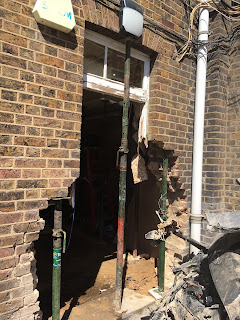 Update:
On 25th August Ed Bristow, a Planning Technician from WBC and myself were invited to see the damage to the bricks and see all the etched bricks that had been saved. Mr Brian P Hargreaves - Design Team Manager, Capital Projects Team - Environment division from West Hertfordshire Teaching Hospitals NHS Trust had been through the pile of dislodged/damaged bricks and removed all pieces of brick with any 'graffiti' on them. These were stored securely in the Estates Meeting room. They had been carefully laid out as in the photo below. The other photos show some of the damage around the doorway in the courtyard. 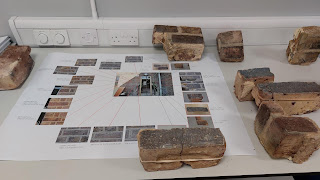 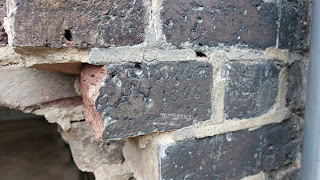 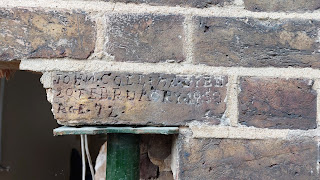 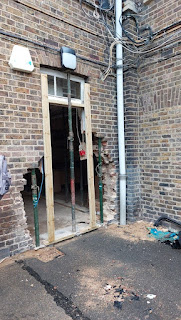 Since that date, work has commenced on repairing the damage and re-siting the bricks as close to their original position as possible. A further update will follow on completion.
And we are pleased to be able to say that the unfortunate lady involved in the accident was released from hospital after treatment.
at August 22, 2022