In the 18th century an area on the outskirts of Watford was called Colney Butts. This area included the Red Lion in Vicarage Road, the stables and adjoining land, the "cottages" at the end of the strip of land next to the pub, now much enlarged which, together with the Red Lion pub was historically a small holding with surrounding meadows. Colney Butts House, a farmhouse across the road from the Red Lion, eventually became Watford Printers.

A comparative look at some early maps seems to confirm that there was a building on the site of 58 Vicarage Road by 1805, but it is not shown on the 1766 map.

There was certainly a property on the site of 58 Vicarage Road when the tithe map was created in 1842; plot no. 1717 was owned by Jonathan King, (presumably the Jonathan King who owned Watford Place), with Henry Catlin as a tenant. The property was described as “House, Outbuildings, Barn & Yard” at the time.

The house was extended in the 19th century and in 1910 the property was bought by the architect William H Syme, who had designed other buildings in Watford.

We know from the 1911 census that the house was being lived in by Percy and Annie Louise Nunn and their children. It was no longer listed as Colney Butts, but as 58 Vicarage Road.

"Architectural interest: A complex building with elements dating from three centuries. Part designed by the architect William H. Syme (F.R.I.B.A.), who was responsible for a number of other Locally and Nationally Listed Buildings in Watford.

Function & Historical interest: The oldest part of the building was originally known as the Colney Butts House. Originally part of a farm and recorded as existing in the eighteenth century, this is one of the oldest houses that survive in Watford. Part of the two storey section was substantially extended during the mid-nineteenth century, when it still remained as a farmhouse. In 1910 the property was purchased as a home by the architect William Syme, who added the single storey element on the western side in 1911.

In 1924 William Syme sold the site to Watford Printers, (which was established in 1921 as a Workers Co-partnership Society). They employed 80 people. In the 1930s the industrial extension was added. Obviously over the years the building had changed dramatically, leading to the loss of most of the original house. No record of the building can be found in the 1939 census.

"Company descriptionEstablished in 1921, Watford Printers Limited have been providing the finest quality print to both private and commercial clients, at cost effective prices. Whilst we are aware of our need to keep up-to-date with our fast moving industry, we are acutely aware of our ethos and try to maintain the traditional values of giving high level service of which our foundations were built. In the early years we were a letterpress printer with monotype / linotype casting; we are currently a lithographic printer for single to full colour work of high runs, with a small digital department to cope with quick instant print demands of today. Our finishing department can handle all kinds of print finishing for retail customers and we will also take on trade work. Watford Printers Limited trades as a Workers Co-partnership Society and we are proud of our continued service to many local companies and Trade Union movements throughout the UK."

And the following is a piece written by Jo Francis for the 'PrintWeek' website:

"It’s the end of the line for Watford Printers, the UK’s oldest worker co-operative, which has closed down just a few years short of its centenary.

The firm was founded in the Hertfordshire town in 1921 by a group of typographical associations. At its peak, when Watford was a major printing centre, the co-partnership society employed almost 80 staff, but this had dwindled to just six employees in recent years.

Watford Printers president John Watson told Co-operative News that the society had not modernised its operations at the same pace as the rest of the printing industry, and its lengthy decision-making process had probably contributed to its downfall.

Local litho and digital printer Hill & Garwood has taken on Watford Printers’ order book and some of its finishing kit, as well as one member of staff.

Managing director Clive Hill said: “We had a very good working relationship with them over a number of years, and they approached us after they’d decided to close it down. It’s such a shame they didn’t make their centenary.”

Watford Printers has been placed into voluntary liquidation with Moore Stephens, and creditors and redundancy payments have been paid from its reserve fund.

PrintWeek understands it only had a small amount of remaining print kit, including an A3 digital printer and a two-colour GTO.

It occupied a fairly substantial site close to Watford FC’s Vicarage Road football ground, part of which was sub-let. The site is likely to be redeveloped into housing and the printer’s 39 members are expected to receive a payout after the building is sold.

"The last of the worker co-partnership societies – and Britain’s oldest worker-owned co-op – has merged with a private firm.

Established in November 1921, Watford Printers has sold its order book to local print firm Hill & Garwood as part of its voluntary liquidation.

At its height in the 1960s and early 1970s, the business supported 78 employees. This year, before liquidation, there were just six workers and 39 members – mostly former apprentices and their spouses.

President John Watson and management committee member Dave Carruthers have been liaising with the liquidator. Mr Carruthers said: “There wasn’t enough work. They were losing £10,000 a month. They had paid into a reserve fund but that was running down.

“It’s a shame because it was a proper co-operative. When they were making money 37.5% of the profit went to the employees, 37.5% went into the reserve fund and 10% went into a provident fund for apprenticeships, sick pay and suchlike. The rest went to the taxman.”

He said the reserve fund, which had been in place from day one, and income from letting part of the printworks building had kept the society functioning during its final years. The print business was, however, chronically unprofitable.

A general meeting on 20 May agreed the company would wind up voluntarily. Michael Finch of Moore Stephens, Watford, was appointed liquidator.

The society has since given notice to its tenants, who have until February to vacate. The building will then be put up for sale and is expected to be demolished to make way for housing. Members will receive a payout after the building is sold. All debts have been covered.

Watford Printers, the last worker co-partnership or productive society, was set up in 1921 by a group of typographical associations. These and other unions, along with co-operative societies, provided investment and custom throughout the co-op’s formative decades. Britain’s oldest worker co-operative is now publisher New Internationalist, which was formed in March 1971.

The society’s heyday came in the 1960s and 1970s, under president Bernard Adams and general manager Bert Wicks, who Mr Carruthers describes as an extraordinary businessman and manager with strong co-operative values. “He didn’t suffer fools gladly,” he says. “He was as tough with the trade unions as he was with customers who wouldn’t pay.”

But the British printing industry transformed during the 1980s as litho and digital printing became the norm and Watford, formerly the centre of British printing, lost its crown. Watford Printers failed to modernise and struggled to compete as new technologies came online.

The unions withdrew their investment as they consolidated, although this did not affect profitability.

John Watson said: “Because we were a co-partnership society we were a bit reluctant to do what we did, but we had to look at the times. We got into digital a little bit but not enough.

“A lot of work was being sent out because we couldn’t handle it. It was inevitable that we would go into liquidation. We were just making sure we looked after everyone here.”

Five of the six workers chose redundancy and have been paid out. Mr Watson is working part time for Hill & Garwood.

“It’s a shame we couldn’t do the hundred years,” he commented, “but in my opinion we should have gone into liquidation before we did.”

He added that the society’s decision-making process, conducted mostly though monthly management committee meetings comprising two worker members, six shareholders and a president, made Watford Printers slow to change and could have had a bearing on the society’s failure to be profitable in the 21st century.

Dave Carruthers agreed: “Being a co-partnership society was its strength and its weakness. There was a lot of community, a lot of fun and laughter, but the business was beyond saving.”

The agrarian nature of this part of the District before the mid-nineteenth century can be seen on the Dury and Andrews’ map from 1766, which shows the majority of the area as farmland. A track, which is the present day Vicarage Road, can be seen going across the area on an east-west axis, with two buildings on its northern side. This group is likely to represent the Red Lion Public House, which was first recorded when the site changed use and became a public house in 1751. Colney Butts House, not shown on the map below, would later be built approximately where the 'H' is. 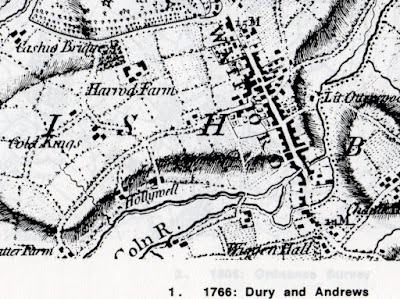 In the decades that followed, further urban development in the area was limited. To the south-east of the Red Lion Public House, a group of buildings had been developed, originally as part of a farm, but later as a more distinctive property known as ‘Colney Butts House’. This property is recorded from the eighteenth century and can be clearly seen on the 1842 Tithe Map. The most significant new development in this area, that is visible on the Tithe Map, was the development in 1838 of the Watford Union Workhouse. During this period the track may have been known locally as ‘Union Street’ – in connection with the workhouse. However, it is detailed as ‘Hagden Lane’ on the 1871 OS Map, before being detailed as ‘Vicarage Road’ on the 1896 OS Map. The etymology of the name that lasted for this stretch of road related to the location of St Mary’s Vicarage on a stretch of the road further east, which has since been cut off by the Exchange Road section of the inner-urban ring road. Hagden Lane still exists as a street name, but only now relates to a stretch further to the west of Vicarage Road. 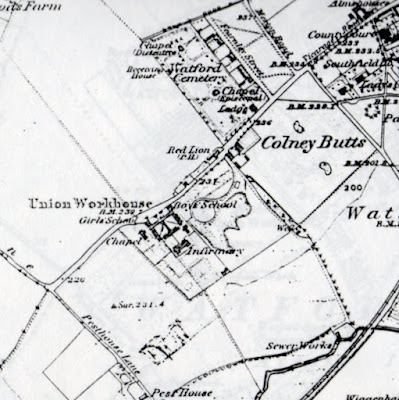 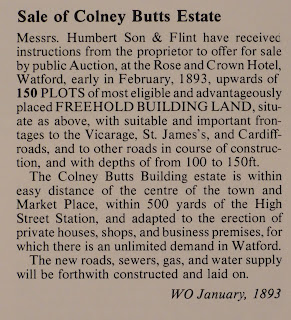 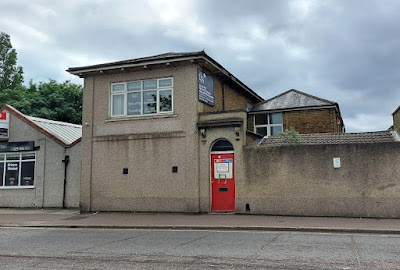 Maps from "Maps of Watford 1766-1938"  Mary Forsyth - available at Watford Museum or viewable on the WBC "Conservation Area Character Appraisal - The Square - January 2017" where there is also a portion of the Tythe map for the area.